Icarus was a figure in Greek mythology. Together with his father, Daedalus, he was held prison in a labyrinth, so obviously had trouble getting out (after all, it was a labyrinth!). Then, Daedalus had a bright idea. He started collecting feathers, that had dropped from the sky (I can only assume from over-flying birds, but anything can happen in Greek mythology) and glued them onto some twigs using beeswax. He made two pairs of wings.

And he told his son, “Icarus, let’s fly out of here!” Initially, Icarus thought “yeah old guy, like that’s going to work; a pair of wings!” But Daedalus said “believe me son, they will work, just try them”. And so did Icarus. He put on the wings and, cautiously, started flapping his arms. And, much to his surprise, he took off! 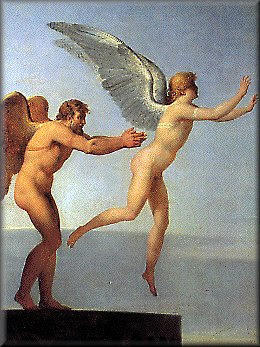 Icarus was flying, initially quite cautiously but gradually he grew more confident and started enjoying his flight. He started flying higher and higher. His father, Daedalus, shouted “don’t go too high!” but Icarus didn’t hear him (or, more likely for an adolescent, ignored him) and went even higher. Until he started flying too close to the sun…

The beeswax melted, the feathers popped out, and Icarus fell down to earth: Dead (the Greeks are no whimps in their mythology).

This is why we call it the Icarus Paradox; the same thing that had made him successful, escape the prison and fly, is what led to his downfall. In his overconfidence he had become blinded to the dangers of flying too close to the sun.

And this is what we often see very successful companies do too; they become very good and successful doing one particular thing, but this also makes them overconfident and blind to the dangers that new developments in their business pose to them. Which ultimately may lead to their downfall.