When acquisitions take over

Firms are expected to base the price and hence the premium they are willing to pay for a transaction on their calculations of how much synergy the deal would be able to generate. Although long-term value creation is always difficult to quantify with any certainty, firms usually do the best they can and then determine the target’s maximum price.

However, once executives have their mind firmly set on acquiring a particular target but are outbid by a rival, this may be difficult to swallow. Often, it seems to awaken the warrior in them; they go back to their people and instruct them to “find me another 100 million or so in synergies” in the target’s books, which enables them to up the bid. For instance, we saw indications of this when Mittal was bidding for Arcelor, and it is hardly a sporadic event.

Clearly, this is a dangerous phase in a bidding process. Copious research, for instance on “escalation of commitment” in M&A deals, has indicated that overexcited executives have a tendency to not walk away from a deal when they should, mysteriously uncovering extra value in a transaction when a firm’s rivals are starting to outbid.

But I guess this bit is only human. It is the part that comes after that which always gets me. The company that ultimately “wins” the bidding war is declared the winner – in newspapers, business magazines, etc. They pop the champagne and celebrate, while the loser pouts and has a crisis meeting.

But are we sure that you are the “winner” when you just paid 300 million for a company you originally calculated was worth half of that…? And are you sure you really are the loser when you just made your competitor pay 150 million more than the darn thing is worth…? Somehow, I am not so sure, no matter what the newspapers say. 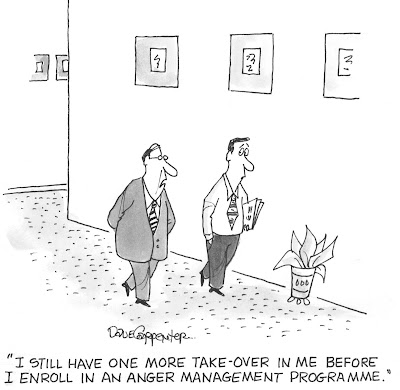 Related Tags: Acquisitions
Previous Topic: Seeds and fertiliser – how to build a firm
Next Topic: When acquisitions take over