What really caused the 2008 banking crisis?

When you compare the 2008 banking crisis with the Enron debacle, with Ahold’s demise or even with the Union Carbide disaster in Bhopal in 1984 some surprisingly clear parallels emerge. Various explanations have been offered for each of these crises, ranging from top management greed, failing watchdogs to insufficient government regulation and inappropriate accounting and governance structures. Yet, there is one common cause underlying all these symptoms and triggers, and that is the structural failure of management.

One central element in each of these disasters, including the banking crisis, is caused by the division of labour and specialisation within and across organisations. In the case of investment banks, financial engineers drew up increasingly complex financial instruments that, among others, incorporated assets based on the American housing market. Yet, the financial engineers didn’t quite understand the situation in the housing market, the people in divisions and banks participating in the instruments didn’t quite understand the financial constructions or the American housing market, and when it all added up to the level of departments, groups, divisions and whole corporations, top managers certainly had no clue what they were exposed to and in what degree.

Similarly, in Enron, managers did not quite understand what its energy traders were up to, Ahold’s executives had long lost track of the dealings of its various subsidiaries scattered all over the world, and also Union Carbide’s administrators had little knowledge of the workings of the chemical plant in faraway Bhopal. The complexity of the organisation, both within and across participating corporations, had outgrown any individual’s comprehension and surpassed the capacity of any of the traditional control systems in place. 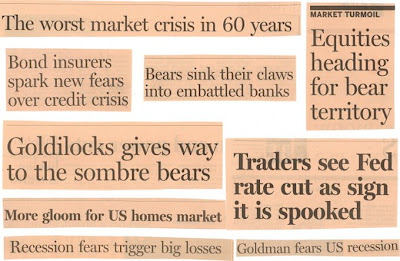 Another crucial role was played by the myopia of success. Initially, the approach used by the companies involved was limited and careful, while there were often countervailing voices that expressed doubts and hesitation when gradually less care was taken – there certainly is evidence of all of this in the case of Enron, Ahold and also Union Carbide. However, when things started to work and bring in financial returns, as in the case of the banks, the usage of the instruments increased, sometimes dramatically, and they became bolder and more far-reaching. Iconoclasts and countervailing voices were dismissed or ceased to be raised at all. For example, in Ahold and Enron, the financial success of the firms’ approaches suppressed all hesitation towards their business strategies.

This caused a third element to emerge: it actually became improper not to follow the approach that brought so much success to many. In the case of investment banks, other banks and financial institutions that did not participate to the same extent as others, received criticism for being “too conservative” and “old-fashioned”. Investors, analysts and other stakeholders joined in the criticism, and watchdogs and other regulatory institutions came under increasing pressure to get out of the way and not hamper innovation and progress.

Similarly, Enron was hailed as an example of the modern way of doing business, while analysts (whose investment banks were greatly profiteering from Enron’s success) recommended “buy” till days before its fall. Similarly, Ahold’s CEO Cees van der Hoeven continued to receive awards when the company had already started its freefall. All of these organisations’ courses of action had been further spurned and turned into an irreversible trend by the various parties and stakeholders in its business environment.

This relates to a fourth management factor that contributes to the formation of a crisis. It’s the factor that is related to what was on everyone’s lips in the immediate aftermath of each of the aforementioned crises: greed. Somehow, all organisations and individuals involved seemed to have let short-term financial gain prevail over common sense and good stewardship. But in all these cases, greed was not restricted to the few top managers who ended up in jail or covered in tar and feathers. Ahold’s shareholders initially profited as much as its executives. Investors, politicians and even customers shared in equal measures the early windfalls of Enron; likewise for the investments banks. Even the Church of England made big bucks on the financial practices they so heavily criticized in the days following the collapse of the system.

The greed factor, however, does not stand alone; it is built into the structure of the whole corporate system. Traders are incentivised to concentrate on making money; top managers are supposed to cater to the financial needs of shareholders above anything else – opening themselves up to severe criticism if they don’t – and customers are expected to choose the best deal in town without having to worry where and how the gains were created. However, none of these parties actually see what lies behind the financial benefits, and where they come from. The traders just see the numbers, the investors only see their dividends and earnings per share and the Church of England simply chose the best deal while the archbishops were unaware it amounted to short-selling. The high degree of specialisation and division of labour both within and between the financial institutions may have revealed the result of the process but showed no sign of how these profits were actually produced.

In combination, all these elements create a system that escalates risky short term strategies until it culminates into an irreversible course of action. Consequently, it becomes unseemly to do anything else. As in a pyramid investment scheme, everybody is interlocked and benefits until the whole structure collapses, sometimes with devastating consequences. The 2008 banking crisis is only unique in the sense that it did not concern one organization but a whole global sector of interlocked firms, due to the high degree of similarity between the various corporations and their business strategies and the unprecedented extent of the financial linkages between them.

All these things point to one underlying cause: the structural failure of management. The management systems used to govern these organisations were unable to control the inevitable process towards destruction. Whether analysing Enron, Ahold, Union Carbide in 1984 or banks in 2008, the striking commonality is the sheer inevitability of the disaster; each of them were accidents waiting to happen, given the state of the organisation.

Instead, organisations will need to tap into the fundamental human inclination to belong to a community (such as an organisation), including people’s desire to do things for the benefit of that community rather than focus on their individual, narrow interests. These are alien concepts in the City today, where incentives are geared towards optimising individual, short-term performance while company loyalty and a sense of community are all but destroyed by the financial incentives and culture in place. Yet, when such human desires to contribute to a community are artificially suppressed through narrow financial incentivation schemes, weird things can happen – and the 2008 banking crisis certainly was one weird thing.

Related Tags: Companies, Making Strategy
Previous Topic: What really caused the 2008 banking crisis?
Next Topic: How to tame an analyst

4 Comments for “What really caused the 2008 banking crisis?”