Wanna play Strategy? Get a board game

I agree strategy is simple, but not that simple!

It continues to surprise me what people sometimes pro-claim is their business strategy. Take for instance the principles I often hear people suggest form the basis of their acquisition strategy.

When a particular transaction is being considered, executives have to go out and explain the logic for the deal to directors, investors, and analysts. Regularly, however, a strategic rationale is only being drawn up after it has been decided by management that the deal is “desirable”. Quite often, this logic will appear contrived, overly complex or simply made to fit the acquisition rather than that the deal results from a well thought through strategy in the first place.

For example, I’ve often heard the logic behind a transaction being explained in terms of complementarities; “it is a perfect match because their geographic spread perfectly matches ours” or “their product portfolio complements ours”, and so forth. Yet, just as often I would hear the logic being explained exactly the other way around; in terms of perfect overlap, for instance “it is a perfect match because they are active in the exact same markets as we are”.

Just the fact that you “complement” each other does not constitute a strategy. It might be worthwhile to combine forces, but first you’d need an argument to explain why this would enable you to create extra value. Without such logic, it’s hollow and meaningless. Similarly, just because you have perfect overlap doesn’t automatically imply it’s a good strategy. Why does adding it up enable you to do something you could not do before?

Yet, the one that always gets me is “the matrix”. Yep, really a matrix. On the horizontal axis, one places countries (in which the company is active). On the vertical axis, one places business lines (in which the company is active). Then, on the intersections, one ticks boxes (with a decisive “X”) indicating in which countries we have which line of business. And our strategy is: We fill the boxes. As many as possible.

But strategy is really not the same as a game of Risk, placing pawns on a map of the world. Sure, perhaps it can be advantageous to own multiple business lines in that particular set of countries, but without a thorough explanation about why it’s these countries (and not some others), and these lines of business (and not some others), and why it is beneficial to have them all, that’s what it is; an oversized game of Risk. But with real money, and real people. 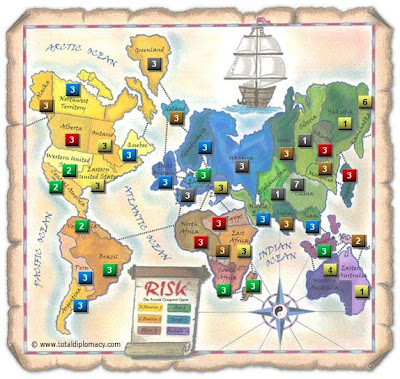