Tunnel vision – “in the end, there is only flux”

“Tunnel vision is caused by an optic fungus that multiplies when the brain is less energetic than the ego. It is complicated by exposure to politics. When a good idea is run through the filters and compressors of ordinary tunnel vision, it not only comes out reduced in scale and value but in its new dogmatic configuration produces effects the opposite of those for which it originally was intended.” Tom Robbins, in “Still Life with Woodpecker”.

We know, from running statistics on the performance of companies over time, that especially very successful firms have trouble staying successful, and adapt to changing industry conditions. We call this the “success trap”, “competency traps” or the “Icarus paradox” in business.

But where does it come from? What is causing it? There are various parts to the explanation but one of them pertains to how the top managers of those very successful companies perceive the changes in their business environment.

Research by professors Allen Amason from the University of Georgia and Ann Mooney from the Stevens Institute of Technology, for example, showed that CEOs from firms with relatively high performance were significantly more likely to interpret changes in their business environment as a threat than the CEOs of poorly performing companies, who more often interpreted the changes as a positive thing.

And this is understandable. If you are the top performer in your industry, any change looks like a threat, because things can only get worse; you like things just the way they are, thank you very much! In contrast, if you currently look like a sucker because you’re the CEO of a company that is not performing very well at all in comparison to your peers, any change is welcome. It represents an opportunity for things to be altered, and your only way is up.

Allan and Ann also showed that, as a consequence, the top managers of the high performing companies were much less comprehensive in formulating a response to the strategic change; they didn’t spend much time evaluating potential alternative courses of action, they didn’t do much research and analysis, and they sure as hell didn’t seek any outside help or opinion.

Most likely, executives in such a situation are going to try to continue as is, resist the change or minimise its impact. However, if the environmental change is profound, ignoring it is likely not going to work! And this is a problem of all times. In the 1970s, The Swiss watch industry, which was superb at making mechanical watches, invented the quartz watch but they didn’t do anything with it. And when companies from Hong Kong and Japan flooded the market with cheap quartz watches they denied the relevance of the change till they had a near-death experience. Around the same time, tyre maker Firestone responded to the introduction of radial technology by trying to beef up its production of bias tyres (they had a genuine death experience). More recently, traditional newspaper companies fought news-reporting on the internet by suing dot-coms and naively copying and pasting their own paper on a website, while Kodak for a long time tried to ignore digital photography mourning its spectacular margins on photo-film.

I guess you could call it old-fashioned tunnel vision. When your company is hugely successful, you don’t want to see that the world is changing. And if you then, eventually, are forced to incorporate the new technology (or whatever it is that is rocking your world), you try to squeeze it into your own version of reality, rather than accept that reality has changed. But reality is that one day the likes of industry dominants like Google, Intel, or Microsoft will go down. Because as Heraclitus already said some five centuries BC: “In the end, there is only flux, everything gives way”. 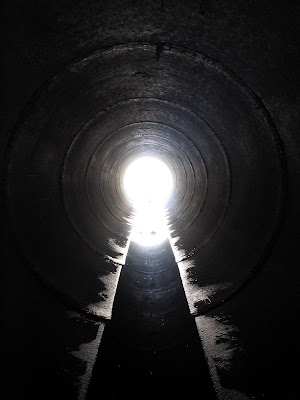 One Comment for “Tunnel vision – “in the end, there is only flux””