Toads and acquisitions – where does CEO “hubris” come from?

The famed investor, Warren Buffet, once said that many corporate acquirers think of themselves as beautiful princesses, sure that their kisses can turn toads into handsome princes. The acquirers pay substantial premiums over market value, believing that they can release the imprisoned princes. But, as Buffet said, “We’ve observed many kisses but very few miracles”.

Because, as you may know, when a firm acquires another company, it usually pays a rather hefty premium. That is, the firm pays quite a bit more for the company’s shares than the price it is trading at on the stock market before the take-over, just to be able to obtain a majority and hence a controlling stake.

According to academic research, this premium usually lies somewhere between a thoroughly whopping 50-70%, dependent on the industry, the size of the firm, etc.

The justification for paying such a significant premium is the idea that the acquiring firm will be able to get much more value out of the company than the seller does. As I’ve said before, the facts show that they’re usually wrong, but firms still do!

It gets interesting when you analyse who pays the biggest premiums. My former colleague at the London Business School, Mathew Hayward, now at the University of Colorado, together with his colleague Don Hambrick performed a slightly mischievous analysis. Because they figured that CEOs who are rather full of themselves would pay higher premiums – because they suffer from “hubris” and are more likely to overestimate their own ability to turn around “failing” companies – they counted the number of favourable articles that had appeared about them in the business press (such as the Financial Times, Business Week, etc.).

Subsequently they computed whether CEOs who had received more media praise paid more for their acquisitions. The answer was: absolutely YES!!

To be precise, each highly favourable article about a company’s CEO would increase the premium paid with no less 4.8%. For an acquisition of a billion, this would be 48 million… And that is for every article!

And this really is 48 million down the drain, because Hayward and Hambrick also showed that CEOs with more favourable press were completely unable to create additional value out of those acquisitions. They had simply overestimated themselves. 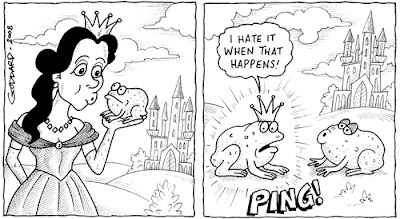 It is tempting to blame these stupid, arrogant executives, and their silly companies and boards. However, what I find equally interesting is that this research also indicates where hubris comes from: It comes from us!

We glorify top managers, print their pictures in newspapers and magazines, praise their decisiveness and vision, give them awards and treat them like superstars. All they’re guilty of – the poor bastards – is believe the BS we write about them.

Related Tags: Acquisitions, Research, Top Managers
Previous Topic: Toads and acquisitions – where does CEO “hubris” come from?
Next Topic: “Time compression diseconomies” – too much, too fast

2 Comments for “Toads and acquisitions – where does CEO “hubris” come from?”