Did you know that when you take the list of Fortune 100 companies in 1966 (America’s largest companies) and compare it with the Fortune 100 in 2006, 66 of those companies don’t even exist anymore? Another 15 still exist but don’t feature on the list any longer, while a mere 19 of them are still there.

It relates to a phenomenon we call “the success trap”; ample research and statistics show, for a variety of industries, that especially very successful firms have trouble staying successful, and adapt to fundamental changes in their business environments (such as new competitors, different customer demand, radical new technologies or business models, etc.). Over the years, they focused on the thing that made them successful (a particular product, service, production method, etc.) and as a result became even better at it.

Yet, this came at the expense of other products, processes and viewpoints, which were considered much less important, and were often discarded. Hence, the company had become very good at one thing, but one thing only… This is not a problem unless, of course, your environment changes. It’s just that most of these darn environments have the nasty habit of doing exactly that…

Then, the company is caught off-guard, and has trouble adapting to the altered circumstances. It is partly a cognitive thing. For example, how come that, in the early 1980s, IBM so dramatically misunderstood the emergence of personal computers? How come Harley Davidson had itself all but wiped out of the market by tiny Japanese entrants like Honda, who made very different motorcycles? How come the once dominant Firestone completely misread the emergence of radial tyres and went down the drains? Laura Ashley, Atari, Digital Equipment, Tupperware, Revlon; the list goes on and on of once dominant companies that at some point seem to lose the plot and get into severe trouble. Some of them recovered, some of them went under, arrogantly assuming that what they always had been doing – and what had brought them so much success – would always work just fine. Only to find out – the hard way, and often too late – that they were wrong, and the world did not need them any longer. 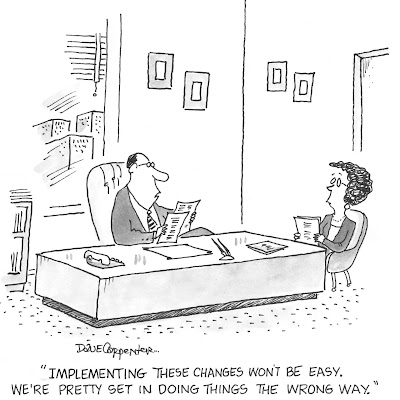