“They were running hand in hand, and the Queen went so fast that it was all she could do to keep up with her: and still the Queen kept crying ‘Faster! Faster!’ but Alice felt she could not go faster, thought she had not breath left to say so. The most curious part of the thing was, that the trees and the other things round them never changed their places at all: however fast they went, they never seemed to pass anything”.
Have you read Lewis Carroll’s “Through the Looking Glass”? If so, you might remember the passage above when Alice meets the Red Queen. They are running and running, but appear to be stationary. Competition among organisations can have the same effect. In order to keep up with competition, firms have to change continuously, in terms of adopting new technologies, launching new products and services, adapting to new business models, etc. Sometimes it can feel like a race, and be quite exhausting.
“Suddenly, just as Alice was getting quite exhausted, they stopped, and she found herself sitting on the ground, breathless and giddy. Alice looked round her in great surprise. ‘Why, I do believe we’ve been under this tree the whole time! Everything’s just as it was!’
‘Of course it is,’ said the Queen, ‘what would you have it?’ ‘Well, in our country,’ said Alice, still panting a little, ‘you’d generally get to somewhere else – if you ran very fast for a long time, as we’ve been doing.’ ‘A slow sort of country!’ said the Queen. ‘Now, here, you see, it takes all the running you can do, to keep in the same place. If you want to get somewhere else, you must run at least twice as fast as that!’
Although quite exhausting – if you don’t like running – it does make organisations better. Professor Bill Barnett, from Stanford, studied Red Queen effects among companies at length. He found that those exposed to ongoing competition and change improved considerably and became much stronger firms.
This is due to a “Darwinian effect” and a “learning effect”. First of all, in such a race, the weakest firms go bankrupt, leaving only the strongest competitors. However, it also stimulates firms to learn and adapt quickly. And if you’re learning and adapting, and becoming a more agile competitor as a result of it, it prompts your competitors to do the same (or die). It’s a bit like an arms race… But one that consumers, and society as a whole, benefit from.

Bill documented another, long-term effect though; sometimes everybody is running in the wrong direction. Or at least, someone took a bit of a wrong turn and everybody followed. It is related to this thing we call the success trap; firms have been running in a particular direction only to find out that the world has just changed and some other corner of the market has become more attractive. This triggers the entry of newcomers, while the original leaders struggle to catch up, simply because they had advanced so far into the other corner of the world.

This is nothing new; we’ve seen it in the disk-drive industry, but also among freight companies using sailing ships when steamboat technology was introduced, among retail banks adopting innovative products and technologies, petrol stations evolving into self-service stations, with car-washes and mini-markets, in the steel industry when mini-mills emerged, tyres in the automotive industry changing from bias to radial technology, and so on. The Red Queen is everywhere, and there are few places where you can afford to stand still. And if you want to get into such a race, look for an industry where everybody is running in the same direction; they’re bound to get stuck in a corner some time soon. 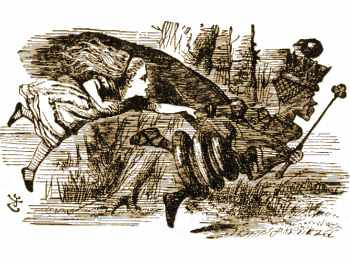