The experiment involved 5 monkeys, a cage, a banana, a ladder and, crucially, a water hose.

The 5 monkeys would be locked in a cage, after which a banana was hung from the ceiling with, fortunately for the monkeys (or so it seemed…), a ladder placed right underneath it.

Of course, immediately, one of the monkeys would race towards the ladder, intending to climb it and grab the banana. However, as soon as he would start to climb, the sadist (euphemistically called “scientist”) would spray the monkey with ice-cold water. In addition, however, he would also spray the other four monkeys…

When a second monkey was about to climb the ladder, the sadist would, again, spray the monkey with ice-cold water, and apply the same treatment to its four fellow inmates; likewise for the third climber and, if they were particularly persistent (or dumb), the fourth one. Then they would have learned their lesson: they were not going to climb the ladder again – banana or no banana.

In order to gain further pleasure or, I guess, prolong the experiment, the sadist outside the cage would then replace one of the monkeys with a new one. As can be expected, the new guy would spot the banana, think “why don’t these idiots go get it?!” and start climbing the ladder. Then, however, it got interesting: the other four monkeys, familiar with the cold-water treatment, would run towards the new guy – and beat him up. The new guy, blissfully unaware of the cold-water history, would get the message: no climbing up the ladder in this cage – banana or no banana.

When the beast outside the cage would replace a second monkey with a new one, the events would repeat themselves – monkey runs towards the ladder; other monkeys beat him up; new monkey does not attempt to climb again – with one notable detail: the first new monkey, who had never received the cold-water treatment himself (and didn’t even know anything about it), would, with equal vigour and enthusiasm, join in the beating of the new guy on the block.

When the researcher replaced a third monkey, the same thing happened; likewise for the fourth until, eventually, all the monkeys had been replaced and none of the ones in the cage had any experience or knowledge of the cold-water treatment.

Then, a new monkey was introduced into the cage. It ran toward the ladder only to get beaten up by the others. Yet, this monkey turned around and asked “why do you beat me up when I try to get the banana?” The other four monkeys stopped, looked at each other slightly puzzled and, finally, shrugged their shoulders: “Don’t know. But that’s the way we do things around here”…

I got this story from my colleague, the illustrious Costas Markides. It reminded him – and me – of quite a few of the organisations we have seen. Over the years, all firms develop routines, habits and practices, which we call the firm’s “organisational culture”. As I am sure you know, these cultures can be remarkably different, in terms of what sort of behaviour they value and what they don’t like to see, and what they punish. Always, these habits and conventions have been developed over the course of many years. Very often, nobody actually remembers why they were started in the first place… Quite possibly, the guy with the water hose has long gone.

Don’t just beat up the new monkey – whether it is a new employee, a recent acquisition or a partner; their questioning of “the way we do things round here” may actually be quite a valid one. 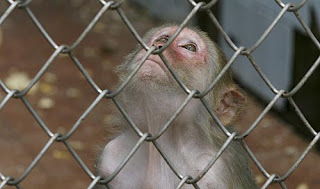 10 Comments for “The Monkey Story”