The hidden dangers of outsourcing

Outsourcing is one of those words that have become hideously fashionable in corporate lingo in the last 5 to 10 years. A business cynic – which obviously I am not! – might conjecture that perhaps it is popular because it appeals to some fundamental human desires for shirking and procrastination, finally telling managers “to stop doing certain stuff” rather than always pushing them “to do more”. I, as a more thoughtful business observer, on the contrary, think that outsourcing often makes sense, simply because you cannot, and should not try to do everything yourself. Other companies can sometimes do a particular thing better and more efficiently than you, if alone because they can bundle and specialise in it, and then you’re better off buying it from them.

Some companies take it a bit far though… Some time ago I was talking to a senior executive of a major airline and they actually had the idea that in the future they might be able to get rid of all their staff, facilities, pilots, planes, and so forth, and concentrate on “being the director of the chain”; that is, not actually do anything but tie together all the activities conducted by others. Hence, outsource everything accept for the coordination between all the parts. Well… here is my opinion: You can forget about that. Try that, and it won’t be long before nobody needs you anymore.

The classic example of that is IBM’s PC in the 1980s. It was IBM’s plan to outsource everything, add its brand name and just one little microchip connecting all the PC’s ingredients. They outsourced the PC’s microprocessors to some geeky guys who owned one of those founded-in-a-garage little companies in Palo Alto (the little company’s name was Intel) and the operating system to yet another geeky guy with big glasses heading a founded-in-a-garage little company in Seattle (the geeky guy’s name was Billy Gates), in the process provoking the genesis of the most powerful alliance the world of business has ever witnessed: Wintel (Windows and Intel).

Because following in IBM’s footsteps towards Palo Alto and Seattle were all the other computer manufacturers which copied the PC; hence buying their microprocessors from Intel and their operating system from Microsoft. And not for long, Intel, Microsoft and end users alike could not quite remember why they needed IBM in the first place and completely “disintermediated” them. It were Intel and Microsoft that reaped the great big benefits of the booming computer market and not grandfather Big Blue IBM, which ended up in a severe crisis as a result of it.

Hence, be careful with outsourcing; giving up control might get you more than you bargained for (especially if it concerns geeky guys in a garage). 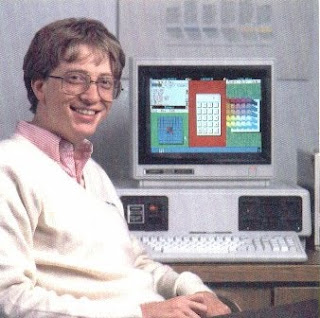 Previous Topic: Forced to be stupid
Next Topic: The hidden dangers of outsourcing