It is a well-known phenomenon from social psychology that people are reluctant to voice minority opinions. My guess is you may recognise this issue and feel it yourself sometimes; when a whole group of people seems to agree on something (a course of action, proposal, etc.) but you have doubts about it, there is a bit of a psychological hurdle to speak up against it. And if you do collect the courage to speak up against it, you do so reluctantly, ready to take the heat.

And we’re right to be reluctant to speak up. Research also shows that minority dissenters are often “punished”, in the sense that people in the majority group get irritated, will blame you for the deal falling apart, may even start to give you the cold shoulder if not spit in your tea when you’re not looking.

Therefore, quite often, people don’t speak up at all if they disagree with a particular course of action, if they feel they would likely be the only ones against it. Instead, they stay quiet.

And there is an interesting consequence to that. We only know that others disagree if they actually speak up. If they don’t speak up, we are inclined to conclude that they do not disagree! As a result, it may be that we stay quiet because we assume that everybody else is in favour while, in reality, lots of others are making the same erroneous assumption…! In social psychology, this phenomenon is known as pluralistic ignorance or the “Abilene Paradox”.

The first person to describe the Abilene Paradox was Professor Jerry Harvey, from the George Washington University. He describes a leisure trip which he and his wife and parents made in Texas in July, in his parents’ un-airconditioned old Buick to a town called Abilene. It was a trip they had all agreed to but, as it later turned out, none of them had wanted to go on. “Here we were, four reasonably sensible people who, of our own volition, had just taken a 106-mile trip across a godforsaken desert in a furnace-like temperature through a cloud-like dust storm to eat unpalatable food at a hole-in-the-wall cafeteria in Abilene, when none of us had really wanted to go”…

Of course, this phenomenon is not restricted to people in Texas. Actually, it happens in the world of business too. Professor Jim Westphal, from the University of Michigan, for example uncovered evidence of the Abilene Paradox among boards of directors.

He collected data on 228 boards of medium-sized American public companies using a variety of databases and questionnaires. He found out that outside directors often did not speak up against their company’s extant strategy, although they had serious concerns about it. At the same time, they greatly underestimated the extent to which their fellow directors shared these concerns! As a consequence, underperforming companies undertook fewer initiatives to change their strategy, and they persisted with their failing course of action.

That’s the Abilene paradox: Nobody may think we’re sailing a good course, but if nobody is willing to rock the boat – thinking we’ll be the only one – we may end up continuing as is, until we all go under… 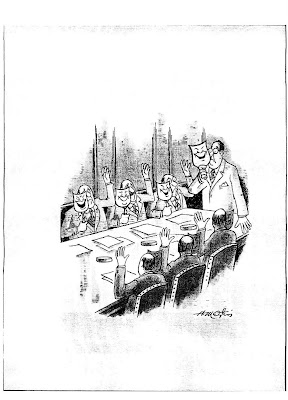 3 Comments for “The Abilene Paradox”