Successful managers – incompetent for sure

The world of business is risky. That’s inevitable. We can analyse all we want, plan, debate, gather information and think it through till it gives us a migraine, sometimes things just don’t work out and nobody could have foreseen it.

So what makes for a good risk manager? Well, it is someone who carefully chooses the best odds. He will sometimes win, and sometimes lose. But, always, he will make quite deliberate and careful trade-offs between his assessment of risk and return; the most expected return for the least risk. Sometimes good managers accept a low return when it is safe (like buying government bonds); sometimes they accept a lot more risk in return for a higher expected return (like investing in the stock market).

Bad managers are those people who just don’t get it. They accept worse average returns for higher risks. And this is where it gets tricky.

Because if they accept very high risks, in spite of lower average returns, every once in a while one of these morons will actually hit the jack-pot…*

That is, if we take the top 1 percent – and only this 1 percent – of top performers, they’re likely to be those people who don’t get it at all… but just got incredibly lucky!

The same is true – as Stanford’s Professor Jim March asserted – for CEOs. The ones that are the eye-catching top-performers are likely the ones who just don’t get it. The dangerous thing is that they are also the ones with the absolute highest return in their business. Therefore we naively believe that they “do get it” and, in fact, are quite brilliant. Moreover, that’s what they start to believe as well… (“I win again; I must be brilliant…!”). Yet, they got lucky once, the might get lucky twice, or three times (at which point we start to notice them) but eventually their luck will turn (the names of Bernard Tapie, Jeff Skilling, Cees van der Hoeven and Conrad Black come to mind).

The same is often true for fund managers, and other people who are trying to make money on the stock market. The top performing funds are not necessarily the best ones when it comes to ability.

For example, have you ever come across these competitions in which people receive a starting sum to “play the stock market” and after 6 months or so the person with the highest return gets the award or even a job? Stupid scheme by design: The person with the highest return is by definition the one that really did not have a clue. Because the only way to win such a “contest” is by making the most silly, illogical and risky allocation of funds, and get lucky. Skillful, careful players will not lose their money, and likely get a decent return, but won’t be the ones to come out on top.

And the issue is: some bloke will get lucky. Ninety-nine out of a hundred cases it will go wrong, but the ultimate winner is dumbo number one hundred. The contest by sheer design ends up picking a nit-wit.

Hence, watch out for “top performers”, in any business or situation which involves risk. The one coming out on top is likely to be a moron, who just got lucky. 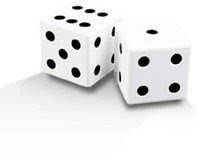 6 Comments for “Successful managers – incompetent for sure”