Sirens and investment bankers – two of a kind?

Some time ago, I was interviewing a CEO of a FTSE100 company, which had acquired several dozens of companies over the past years, when we came to speak about investment bankers. He then asked me “do you know who the Sirens were, in Greek mythology?” I said “yes” (because I did and, of course, also because I did not want to appear ignorant).

Sirens were beautiful maidens located on a small island surrounded by cliffs and rocks. They would lure seamen who sailed near the island with their enchanting singing, to shipwreck to death onto the rocks.

“Well” this CEO continued, “investment bankers are just like Sirens”. That caught my attention…

“How’s that?” I asked. “They constantly try to seduce you into doing another deal, and they don’t care at all whether that deal actually make sense for the company”. Ok…

Of course, firms and their shareholders are not the only parties potentially benefiting from a transaction. A vast industry exists that initiates, values, negotiates, and closes deals. However, the interests of such parties, for instance investment bankers, may not always be aligned with those of the firm. Especially when M&A times are relatively slow, investment bankers may attempt to initiate deals from which it is not clear that they are to the benefit of the potential acquirer.

As an ex-investment banker told me some time ago, “when times were slow, we’d all go through our address books and discuss ‘who hasn’t done a deal for a long time’, because we would usually be able to talk such a person into doing one”.

Yet, one could make a good argument that investment bankers are not necessarily to blame for this; they are supposed to follow their interests and it is up to the manager to say “no” to a proposed transaction.

Yet, deals – and investment bankers – can be seductive. Sometimes, CEOs who are inclined to at least listen to their investment bank would do well to do like Odysseus; Odysseus wanted to hear the mythical Sirens sing but was less keen on shipwrecking. So he asked his sailors to plug their ears with beeswax and to tie him firmly to the ship’s mast. They then sailed past the Sirens; Odysseus was overwhelmed by their music but, being restrained, could not free himself to follow his urges and run his ship onto the rocks.

All we need now are boards with beeswax and offices with a mast. I will bring the rope. 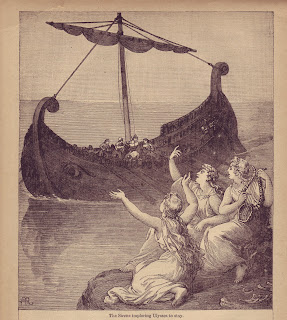 6 Comments for “Sirens and investment bankers – two of a kind?”