Similar, not the same, but just alike

Normal people – you and I (well… at least you) – as we know from ample research in social psychology, have an inclination to conform to certain peer groups, in the way we dress, speak, which music we like, how often we brush our teeth, buy a car or go on a holiday. Yet, on the other hand, we also like to stand out from the crowd (if just a little bit). It’s known as “optimal distinctiveness theory”.

We see the same thing in organisations. Some years ago, I was working with an executive (which will remain blissfully anonymous) in charge of expanding his company into foreign markets, mainly through acquisitions. We analysed his strategy and various market characteristics, through which it became obvious that the Scandinavian market, in his line of business, appeared to be particularly attractive. Yet, he clearly did not even want to think about entering this area. When I persisted in probing why, his answer was frank: “Look, none of my major competitors are active in that market, so there must be something wrong with it”.

I was slightly stunned, but that was the end of it.

Until, a few months later, I ran into him again. Having asked what he had been up to he answered, “I’ve just entered the Scandinavian market”. Upbeat, I asked him whether my advice had finally convinced him. His reply was, “not exactly… it is just that [my biggest competitor] has just entered the Scandinavian market, so it must be a good place after all”.

I am not making this up, or even exaggerating (for a change). Was he unusual in this behaviour? I think he was unusual in terms of the frankness of his admission, but not so much in terms of his behaviour. One of the biggest influences on strategic decision-making – if not the biggest influence – is imitation. We do what others do around us. Academic research has indicated over-and-over-again the prevalent nature of imitation among a wide array of management decisions, such as the adoption of conglomerates, choice of location when entering foreign markets, implementation of performance management programmes (such as ISO9000 or Six Sigma), product market entry, matrix organisations, and so on and so forth.

Yet, like individuals in everyday life, CEOs don’t like just doing what everybody else is doing; sometimes they just want to do something a bit different. For example, I recently analysed a large database of about 800 companies in the pharmaceutical industry, focusing on the breadth of their product portfolio, and the statistical results clearly indicated that companies sometimes also choose to do the exact opposite of what their peers are doing, merely for the sake of doing something else.

Similarly, some time ago, I was working with some executives of a British newspaper company, who faced the decision whether or not to also adopt the new small-size paper format, just like several of their peers/competitors had. Ultimately, they decided against it. One of the executives said “had we been the first one to come up with the idea, we would have done it, but now that others have done it before us, we can’t; it just wouldn’t be very original”.

And in a way, I like this attitude. Granted, when you simply do the opposite of what others are doing, or explicitly do not want to do it just because your peers did it, you’re as much influenced by peer behaviour as when you’re an imitator (only 180 degrees opposite). Yet it also brings a bit more variety to the world, and hence makes life a bit more interesting. It gives you the opportunity, as a firm, to not be average and stand out from the crowd. And, who knows, perhaps even make an above-average profit as a result of it. 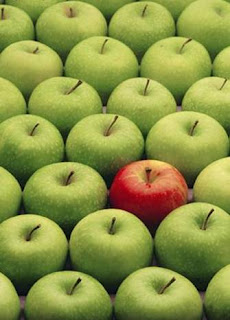