You never heard of patent sharks?! You’re kidding, right? Ok, I’ll admit it, I had never heard of them either. But they sound pretty scary, right? Well… ok, perhaps not; the word “patent” sort of seems to take the edge of the word “shark” a bit. Yet, now that I have learned more about them, I have to admit, I am starting to believe that they should send some shivers down your corporate spine; they really are quite creepy.

My colleague at the London Business School, Markus Reitzig, has been studying patent sharks at length. I always found IP (intellectual property) a bit of a bore when it comes to research topics but, admittedly, his research did remind me of Jaws III, but then with briefcase, pin-striped suit and, importantly, a mob of solicitors to accompany him. Let me explain.

As you may know, when it comes to the effectiveness of patents, pharmaceuticals are a bit of an exception. In most industries, patents provide only very limited protection against imitation by competitors. Usually, the part of the product that is patent-“protected” can be substituted or “invented around”. Therefore, what firms have started doing is protect their products with as many patents as possible. That is, it is not uncommon in some high-tech industries to have over a 1000 different patents protect many little components in a firm’s product. They figure, one of them may not do the trick but if you have such a bunch of them, collectively they should give some protection.

Yet, since competitors do the same, as a result, researchers have long noticed that patents have become sort of a corporate currency. How does this work? Well, whatever you want to do, in terms of developing a new product or technology, you’re bound to infringe on someone’s patent. Luckily, that someone is likely to need to infringe on some of your patents too. Rather than going to court, firms usually strike a deal: “I will forgive you for infringing on these 84 patents if you just absolve me from infringing on your 63 ones”. And this system generally works quite well.

However, given the plethora of patents in such industries, the difficulty is that you seldom know in advance exactly which patents you will be infringing on; there are just too many of them lying around. What has now happened is that some specialised firms – the infamous “patent sharks” – have started taking advantage of this. They acquire patents not with the intention of using them, but with the aim to extort money from the unknowing infringers.

When a patent shark finds out that a certain firm is using a technology which more or less falls under one of its patents, it waits patiently until that firm has fully committed itself to the technology (and has incorporated it in its products, marketed them, made additional investments, etc.). Then the shark surfaces…

It will demand large sums of money for the infringement. If the firm refuses, they will roar “court action!” and threaten to shut them down. And the nice thing – at least, for the shark – is that the patent doesn’t even have to be a real good one. Even if it is only a half decent patent, with little chance of holding up in court, often they can convince a judge to issue an injunction, forcing the firm to suspend business pending the court’s decision. And this can be so potentially disastrous for the firm that it quickly coughs up the dough to make the shark go away.

For example, NTP, a pure patent-holding company, filed a suit against RIM; the producer of the best-selling Blackberry. RIM was confident that the five patents NTP was throwing at them would not hold up in court – because all of them had already been preliminarily invalidated by the US Patent and Trademark Office while two of them had already received a final rejection! – but when it seemed that a particular US district court judge (“The Honorable Judge James Spencer”) was inclined to grant the injunction, which would have costed RIM billions in lost revenues and deteriorated competitive advantage, they promptly – but undoubtedly grudgingly – decided to hand over 612.5 million dollars to NTP.

Getting scared already? I guess you should. There just might be some shark circling underneath, in your blue ocean… holding some obscure patent which could cost you an arm and a leg, if not more. 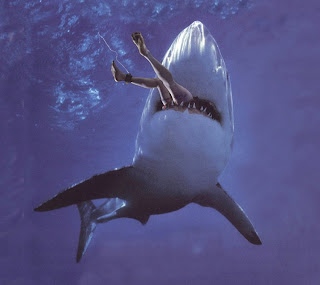