My father was a young boy during World War II. He grew up in a small village in the Netherlands just south of the river Maas, which, parallel to two arms of the river Rhine, flows from East to West, cutting the country in the half. In 1944, while the Allied Forces were moving north, approaching the Netherlands from Belgium after having landed in Normandy, the barn behind his home served as a make-shift German army hospital, while their commanders took up headquarters in the family’s living room. When the German soldiers left, the barn filled up with wounded allied soldiers instead, and the German commanders at his dinner table were replaced with their english speaking counterparts.

He never told me about what he saw in the barn. He did recall with fondness the sweets and cigarettes that the soldiers used to give him (he was 10 years old) – Germans and Americans alike.

Anyway, he used to tell me about the operations that the allied forces conducted to get across the big rivers, trying to advance into the North of the Netherlands. One of them was Operation Market Garden. Operation Market Garden was a huge operation – involving some 35,000 troops – in which soldiers, weaponry, vehicles and equipment were dropped near the bridges crossing the three rivers, to occupy and hold them while the Allied forces advanced through the south of the Netherlands, preventing the German troops from blowing them up.

I had become a professional student of organisations by then, having accepted a position as an assistant professor of strategy at the London Business School. It was then that I was struck by how similar the processes are that lead up to spectacular business failures to the processes that made Operation Market Garden a disaster.

Because Operation Market Garden was a huge failure. It became one of the biggest massacres of the whole war; for instance, more people died in Operation Market Garden than on D-day itself. The Allied Forces did not manage to hold the third bridge at Arnhem, and it took another 8 months before the north of the Netherlands was liberated; during the preceding winter, thousands of people, cut off from the agricultural lands of the south, perished in a famine known as “the hungerwinter”. 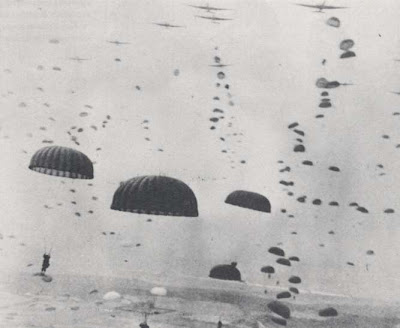 Yet, the commanders in charge of the operation had received many early warning signs that it was going to be a challenge; perhaps a bridge too far. The Dutch resistance had sent coded messages that that at least one German tank division was located unexpectedly close to the Allied Forces’ drop zone (their warnings were ignored); english spy plane pictures examining the drop zones had taken photographs of the tanks (the photographs were brushed aside), officers and a Polish general had expressed doubts about the preparations for the operation (their hesitations were dismissed), and soldiers questioned whether the radios, to be used for vital coordination and communication on the ground, would work (they didn’t).

So why did the general in charge of the operation (General Browning) ignore all these warning signs and proceed as is? Well, for the same reasons as why top executives go ahead with a big acquisition despite due diligence suggesting it’s a bad idea, and why companies go ahead with a planned product launch despite retailers and sales people warning the product isn’t ready yet: We call it “escalation of commitment”: There is a lot riding on the project, both in terms of what is at stake (the future of the company; the war) and in terms of the personal reputation of the individual in charge. Pulling the plug will make you look stupid and incompetent; succeeding will make you a hero. And you have made a very public commitment to seeing the project through, having championed it from the start. There is no way of stopping it now.

However, at some point, your commitment may escalate: Your persistence is no longer brave but foolish, as the warning signs are too ubiquitous. The trick is knowing when to pull the plug – but unfortunately it’s not like you can put that in a spreadsheet, hit enter and see the answer; it’s a judgement call.

And being too late to make this call – not realising it is has become too much – is, I am afraid, only human. It is difficult to bite the bullet and pull the plug. Yet the consequences of being human can be disastrous, and truly a bridge too far.