Numbers and strategy – do they mix?

In your firm, when you come up with an idea for a new product line or service, or some other project that you think has great potential and want your company to invest in, what do they want to see? My guess is it’s “payback time”, a “net present value” calculation, or some other number in a business plan, right? And if you can’t produce the numbers, you won’t get the dosh.

But that’s also a bit of a problem; sometimes the most promising projects with long-term strategic implications are exactly those that are impossible to quantify.

Take Intel’s invention of the microprocessor. In the early days, when they were working on and (quite heavily) investing in it, did they have a business plan, a net present value calculation and a payback time? Heck no. They didn’t even know what they were going to use them for – they had no sense of a potential explanation (dreaming of sticking them into handheld calculators and lamp-posts) till IBM showed up and worked hard to convince them that putting the darn things in their PCs really had a future.

Would microprocessors ever have seen the light of day in that firm if Intel’s management had insisted on a “payback time” calculation? Nope, we’d still be using an abacus if they had (ok, now I may be exaggerating) and Intel would never have been the mega-success as we know it now (not exaggerating).

So why do we so incessantly insist on producing numbers if we’re talking strategy? Genuine strategy, by definition, deals with long-term issues, uncertainty and ambiguity. Hence, numbers don’t work very well; they are unreliable, potentially misleading and sometimes sheer impossible to produce in such a situation.

And I guess that is exactly why we/companies are so eager to see them. The long-term, uncertain aspects of strategic investment decisions make us rather insecure whether we’d be doing the right thing; therefore, we really really would like to see some numbers to lull ourselves into the belief that we’ve been thorough and have uncovered the facts and have a solid basis on which we’re accepting or rejecting the proposed course of action. Of course that’s just make-belief (you can make numbers say whatever you want them to say) and may make you quite myopic; missing the things that are difficult to quantify but much more important.

Am I propagating that we should get rid of numbers in strategy altogether? Heck no; forcing yourself to go through some sort of quantifying exercise can sometimes make you uncover and realise things that you hadn’t thought of before. But subsequently you should do what Tony Cohen, CEO of Fremantle Media, told me he always does when they’ve made financial calculations regarding new television production proposals: “Once we’ve carefully and painstakingly produced all the numbers we toss them aside and sort of make a decision based on our gut feel and experience”.

Numbers in strategy may form one (minor) input into your decision-making, but don’t mistake them for the real thing: make them, but then toss them aside and use your judgement and common sense. 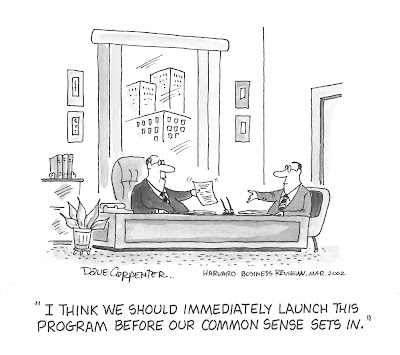 One Comment for “Numbers and strategy – do they mix?”