Narcissus versus Humble Bloke – and the winner is…?

Have you heard of Narcissus – the character in Greek mythology? Narcissus was an exceptionally beautiful young man. He was so beautiful (and full of himself) that he fell in love with his own reflection in the water. He could not bring himself to stray from the well and did not even drink the water; fearing he’d disturb the water reflecting his image and would not see himself again. Our word “narcissistic” – to describe someone full of himself – is derived from it.

How would you recognise a narcissistic CEO (as certainly not all of them are exceptionally beautiful)? Seriously, think about it, what would you say are signs of a CEO who is narcissistically full of himself…?

Someone who always has his photograph displayed very prominently in his firm’s annual report? The CEO’s prominence in the company’s press releases? How often he uses first-person singular pronouns (such as I, me, mine, my, myself) giving interviews to the business press? Or his financial compensation relative to the second-highest paid executive in his firm?

Arijit Chatterjee and Donald Hambrick, of Pennsylvania State University, measured all of these things, among 111 CEOs, and used them to construct a measure of their narcissism. They selected their 111 CEOs from the computer hardware and software industries because prior writers on Leadership had suggested that narcissism in a CEO might actually be a good thing in very dynamic, fast-changing industries – which these two are. They then examined a bunch of characteristics of a firm’s strategy, to figure out what narcissistic CEOs do differently than their more humble counterparts (in between periods staring at their own reflection I guess).

And guess what, they found that the more narcissistic types changed their firm’s strategy more often than the humble blokes. Moreover, they also tended to undertake a lot more – and a lot bigger – acquisitions. The performance of their corporations (perhaps partly as a consequence) fluctuated quite heavily, in comparison with the humble types.

But what about the level of their firms’ performance; it may have fluctuated more heavily but did the narcissistic guys on average achieve higher or lower performance?

Neither. They didn’t do better, and they didn’t do worse (both in terms of return on assets and total stock market performance).

Arijit and Don concluded, “that narcissistic CEOs favor bold actions that attract attention, resulting in big wins or big losses, but that their firms’ performance is generally no better or worse than firms with non-narcissistic CEOs”. 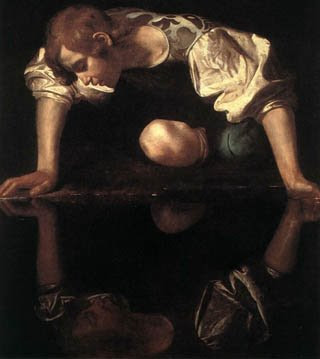 One Comment for “Narcissus versus Humble Bloke – and the winner is…?”