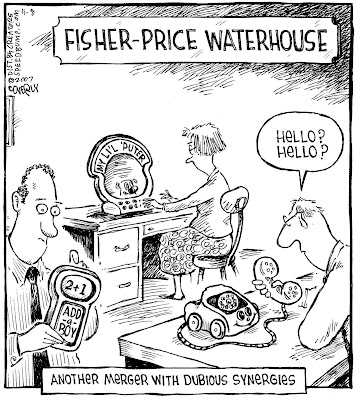 Here come the stats on M&A again – you may have seen them before, but since I am sure you (still) don’t believe them, here they are once more:

70-80% of acquisitions fail, in terms of creating stock market value. Three overview studies in the prestigious Strategic Management Journal showed that on average share prices of acquiring companies fall between .34% – 1% in the ten days following the announcement of an acquisition. And this is a result consistent over a period of 75 years of stock market data!

“But that’s only 10 days”, you might say, “these acquisitions might still create value in the long run, right?” Nope; wrong. Research in the Journal of Finance concluded that acquiring firms experience a wealth loss of 10% over the five years after the merger completion.

“Perhaps the stock market initially is too pessimistic?” Actually, quite the opposite: A study on a 131 big deals (over $500million) indicated that in 59% of the cases, market-adjusted return went down on announcement. Hence, the stock market was positive about 41% of the deals. Not an awful lot, but it could have been worse. Or could it…

After 12 months, 71% of all those deals had negative consequences! That is, of the 41% of cases where market value went up on announcement because the stock market was optimistic about their potential to create value, only 55% still had positive returns the year after! Thus, even the stock market initially had been way too optimistic. Even more deals ended up destroying value than they first had expected.

Yet, every time I show these statistics to a group of executives they frown and proclaim, “we know this, but it is not true for our company”. Often followed by, “we analysed all our deals and 2/3 of them was a success” (not sure why it is always 2/3, but it always is). Yeah right.

But what really is the “analysis” that most of them performed? They have asked people in the relevant BU’s whether they thought the deal was a success. Now, if these people already overtly say “no”, I am pretty sure the acquisition was a disaster.

Of all the deals conducted, this leaves 2/3 of “non-disasters”, which is not the same as a success. Perhaps another 1/3 did not cause major problems as the integration went alright, but that does not mean that the (usually very expensive) deal actually created value – at least beyond the take-over premium that was paid. You might have been better off not having done it at all, despite having avoided a disaster.