Mental models – let’s all think within the same box

The illustrious former chairman of IBM, Thomas Watson, once said “Whenever an individual or a business decides that success has been attained, progress stops”. What he was speaking about was that successful firms find it very hard to change, for instance in response to changes in their business environment. (Unfortunately he is also the person who allegedly said “I think there is a world market for maybe five computers” so I would say “physician heal thyself”… but I guess that doesn’t make him wrong about the first bit!)

This rigidity-due-to-success effect is partly a mental thing. Once something has brought us much success for a sustained period of time, we sort of forget that there are other ways of doing things. It may even be so bad that we don’t spot the changes in our business environment at all anymore. However, let’s not make the mistake to think that such strong mental models of how we go about doing our business are all bad. They also bring some pretty strong advantages. Consider the following:

Aoccdrnig to rscheearch at an Elingsh uinervtisy, it deosn’t mttaer in waht oredr the ltteers in a wrod are, the olny iprmoetnt tihng is taht the frist and the lsat ltteer are at the rghit pclae. The rset can be a toatl mses and you can sitll raed it wouthit a porbelm. Tihs is bcuseae we do not raed ervey lteter by itslef but the wrod as a wlohe.

All of the above is clearly nonsense; they’re not words at all, it is just gibberish. But something makes us able to read it without a problem; that’s because all the right pieces of information are there (all the letters) and roughly in the right shape. Plus, the context (the sentence) makes sense to us. Then, our brain does the rest. We can perfectly understand it precisely because we have seen the individual elements (the words) before and understand the context.

It is the same in business situations; we can quickly grasp and interpret a particular issue if we understand the context and have seen similar problems and situations before. We don’t have to reinvent the wheel every time we see a similar problem but can build on our experience.

Thus, forming mental models is how we learn; they enable us to make quick decisions without the need for complete information. This is a powerful thing to have for every organisation. You don’t want all people thinking out of the box all the time; a coherent group of like-minded people with lots of common experience can be a very useful asset indeed.

The negative effects of common mental models – blindness to changes and viewpoints that don’t fit the model; something known as “groupthink” – you can possibly overcome through smart organisational design. For example, I’ve seen large organisations that created multiple similar sub-units; each of them very coherent, but also very different from each other. They attempt to get the best of both worlds: coherence within units; diversity between them.

Hence, groupthink can be a good thing, as long as you make sure to have multiple groups… 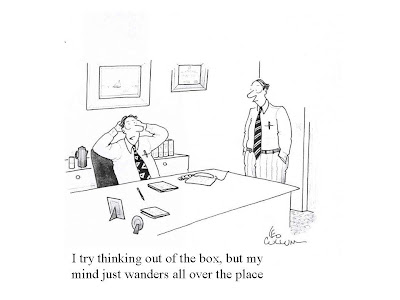