Remember the disaster with Union Carbide’s chemical plant in Bhopal, India, on the 3d of December 1984? One of the most dreadful industrial accidents in the history of mankind; thousands of people died terrible deaths on the horrid day itself; tens of thousands of people perished in the aftermath.

Strangely enough, the faith of Union Carbide’s CEO at the time, Warren Anderson, always reminds me of Tolstoy’s War & Peace.

In our world, CEOs often become celebrities, heroes and superstars. We place them on the cover of magazines such as Fortune and Business Week, we give them awards, honorary doctorates and multi-million salary packages, while they command dazzling fees for after-dinner speeches, at which they are drenched in the adoration of star-struck hopefuls, who quench their thirst for personal business success on the (expensive) words of the great leader.

The manager starts to personify his company and its success: Steve Jobs and Apple, Carlos Ghosn and Nissan and, of course, Jack Welch and GE. But do we really believe that organisations that consist of a 100,000 employees, located on various continents in all corners of the world, producing dozens of products in a multitude of industries and markets are controlled by the lunch-time decisions of one man? Can one man be that omni-potent?

Similarly, CEOs can become villains. They start to personify the misery that their organisation has brought us. We mock them, vilify them and, if we get the chance, put them in jail. Cees van der Hoeven – who got off with a suspended jail sentence – exemplified Ahold’s fall from glory; Enron’s Jeff Skilling is spending 24 years in a prison in Minnesota (of all places), while former media mogul Conrad Black is at least catching some rays of sunshine through the bars on his window of his cell in Florida.

I guess these attributions are not restricted to business leaders only. Tolstoy, reflecting on the eventual defeat of the Napoleon’s forces in Russia after the battle of Borodino, was explicitly sceptical of any attributions of omnipotence. He wrote: “Many historians contend that the French failed at Borodino because Napoleon had a cold in the head, and that if it had not been for this cold … Russia would have been annihilated and the face of the world would have been changed”.

“If it had depended on Napoleon’s will whether to fight or not to fight the battle of Borodino, or had it depended on his will whether he gave this order or that, it is evident that a cold affecting the functioning of his will might have saved Russia, and consequently the valet who forgot to bring Napoleon his waterproof boots on the 24th would be the saviour of Russia”.

“But for minds which cannot admit that Russia was fashioned by the will of one man… such reasoning will seem not merely unsound and preposterous but contrary to the whole nature of human reality. The question, ‘what causes historic events?’ will suggest another answer, namely, that the course of earthly happenings … depends on the combined volition of all who participate in those events, and that the influence of a Napoleon on the course of those events is purely superficial and imaginary”.

Perhaps we also overdo it a bit when we bestow our adoration or vilification on the CEOs of multinational companies. The people from Bhopal viewed – and still view – Warren Anderson as the prime instigator of the evil that befell them. They still paint “Hang Anderson” on the city’s walls and burn puppets in his imagery. Was Warren Anderson responsible? I am sure he was; he played his part being in charge of the company that owned 51% of the dreadful factory. The personified anger of the people of Bhopal is understandable, just like the adoration of Jack Welch con suis seems due to some deep human inclination. But, in reality, both the success and the downfall of our organisations are, as Tolstoy put it, the result of “the combined volition of all who participate in those events”. 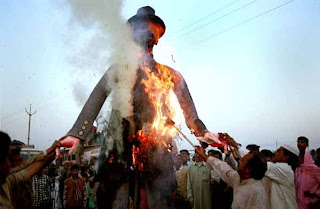