Forced to be stupid

Jessica Nolan, a researcher at the University of Arkansas, was interested in persuading residents of a particular California Community to conserve more energy at home. For this purpose, she designed four types of notes, to be delivered to people’s homes. These notes (roughly) said the following:

Before using the notes, she knocked on a number of residents’ doors and asked them which of the four arguments would most likely persuade them. Pretty much everybody said, “Not the fourth! (I care about the environment, I care about society, I certainly care about money, but I couldn’t care less about what everybody else is doing”). But did they?

Subsequently, Jessica sneaked out at night and hammered one of the four notes on each door in the community.

Some time after that, she went back to check people’s meter readings. And guess what: households that had received the fourth note (“everybody else is doing it”) had by far the biggest reduction in energy consumption.

We are hugely affected in our decision-making and behaviour by our notion of what others are doing, although we usually don’t quite realise it (and deny it vigorously!). We might think that “oh no, I don’t care what others are doing” but reality is: we do. It is only human

Even top managers can be almost human (or at least some of them). For example, there is a lot of research on what influences managers’ strategic decisions (e.g. whether to choose strategic option A or B). And guess what, it’s imitation.

There is research on where firms choose to locate their new plants, whether or not they enter a particular market, adopt a new type of organizational structure, a governance instrument, etc. etc. Consistently, results show that managers are led by one simple question: “what are my competitors doing?” And then just do the same thing.

The problem is, sometimes what your competitors are doing is stupid. For example, research has indicated that (in certain industries) ISO9000 quality norms are counter-productive. Yet, throughout the 1990s firms imitated each other anyway and adopted the system.

And it gets worse. Sometimes, if you’re the odd one out that does not adopt the new practice, you start to look “illegitimate”. Analysts, shareholders, customers and so on start asking questions: “everybody else is doing it; shouldn’t you?” “Surely, everybody else can not be wrong”. But yes they can!

In this case – because customers start to shun them, investors criticize them, analysts downgrade them, etc. – firms may actually start to suffer from not having adopted the silly practice.

This places pressure on the firm to also act stupid, just to fit in, and be accepted. It takes a brave firm, to stop such a vicious cycle of imitation. 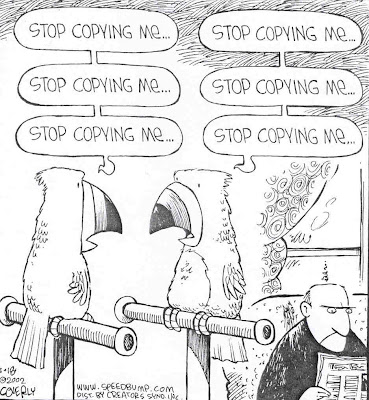