Executives: super-human after all…

It is a well-known aspect of our everyday behaviour: when we perform well, we credit ourselves; when something goes wrong we blame something (or someone) else. This effect – known as attribution bias – has been well-documented by social psychologists, but I guess we didn’t really need their research; it is quite a common phenomenon in everyday life.

Professors John Wagner and Richard Gooding, at Michigan State University, examined whether managers suffer from the same bias. They rounded up a 102 executives and subjected them to some lengthy experiment and statistical analysis – the details I won’t bore you with because the answer was (surprise, surprise), yes. When a company’s performance is great, executives claim (and actually believe!) that it is due to their brilliant efforts; when, vice versa, their company’s performance sucks, it’s someone else’s fault and they’re really really not to blame, honoust. Yep, executives are just like humans.

As said, when their own company was performing well they attributed it to their own efforts, while when they were performing badly they blamed some external circumstances. Yet, when assessing their colleagues’ performance, the bias flipped! When other executives’ firms performed well, the managers said “it’s due to some external circumstances” while when their colleagues’ firms were underperforming, they attributed it to these persons’ errors!

I believe this extremity hadn’t been documented before, among humans, other mammals or reptiles. But I guess it is just very very human, which is perhaps some sort of a consolation? After all, it just shows managers are the most human among us. 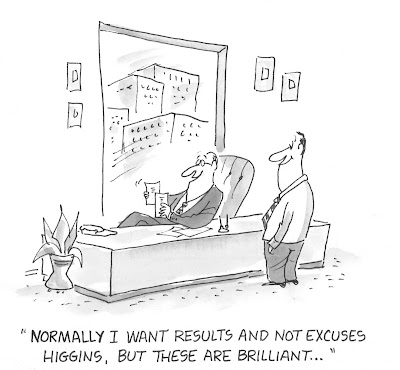