About a century ago, the Fore people, who inhabited Papua New Guinea, had the habit of burying their deceased relatives, just like many other societies. Yet, on some sunny day, Uncle Ed died, and it was just around lunch time. Uncle Ed’s relatives were about to put him into the ground when one of his cousins (who looked particularly hungry) said “why bury all that good meat; it’s a waste; we might as well eat it”. And so they did.

When the following month another relative died, they did the same thing, and not for long, the whole village was eating their deceased relatives, rather than putting them into the ground. The advantages were obvious; there had actually been quite a bit of famine and malnutrition among the Fore people and this habit enabled them simply to not be so hungry.

Some time later, a visitor from a neighbouring village witnessed the practice. When he got home and his cousin died, he quickly convinced his relatives to rather than bury the good chap, consume him on the spot. Gradually the practice started spreading to all villages in the tribe, until the habit of eating deceased relatives had become the norm and the Fore’s proud tradition.

Yet, unfortunately, they ate everything, including their relatives’ brains. As a consequence, they developed a horrible, lethal disease called Kuru (which is related to Creutzfeld-Jacob, aka mad cow disease). The disease has quite a long incubation time (i.e. it takes several years before it becomes apparent) but eventually the Fore people started getting sick and dying in masses. Of course, they noticed something was seriously wrong but, due to the disease’s long incubation time, had no idea that their misery was caused by the habit of eating their deceased. The practice continued until half of the Fore population had been wiped out and Australian invaders put an end to it (because they thought it was gross, not because they understood it caused the disease).

Why am I telling you this story – after all, you might be reading this just before lunch? The reason is as follows: Many managers and companies remind me of the Fore people.

Let me explain: The Fore’s practice clearly was detrimental; after all, it was killing them! Yet, the reason for them adopting it was clear too: the practice gave them an immediate advantage, namely less hunger and less starvation. In the long run, however, they were definitely worse off for doing it but the problem was that, due to the practice’s incubation time, they could not understand that it was this habit that they had picked up many years ago that was causing the problems.

Quite a few popular management practices have the same characteristics. The problems they cause only occur in the long run and are therefore underestimated or not understood at all. The benefits are immediate.

Take, for example, the practice of “downsizing” (or rationalizing, restructuring, reorganising, etc.: that is, making people redundant). It is a trend that has now been going on for at least a decade and a half; companies – even if they are not in financial difficulties – engage in systematic programmes to reduce the headcount in their organisations. The short-term benefits are clear: It leads to lower costs (sometimes accompanied by a positive response from the stock market to the announcement of the programme). Yet, there is also evidence of sizeable long-term detrimental influences, such as reduced innovation and lower employee commitment and loyalty. However, such consequences are only noticeable in the long run.

Usually, when a firm faces a serious problem, for example due to a lack of new products in the pipeline, top management does not realise that the lack of innovation is caused by the downsizing programme that they engaged in a near decade ago. Just as it did for the Fore people and their illness, the long lead time makes it all but impossible for managers to connect and understand cause and effect. Thus, not only will top management take inappropriate action to solve the problem (not seldom another cost-cutting programme…), it also remains unclear to other firms that downsizing is harmful, leading them to adopt and continue the practice too. 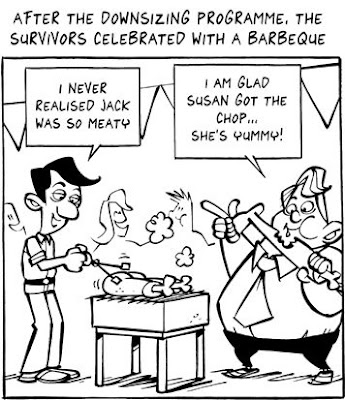