Dirty laundry: Who is hiding the bad stuff?

Are firms sometimes inclined to conceal negative information, for instance in their communication to shareholders?

Some years back, two researchers – Eric Abrahamson from Columbia Business School and Choelsoon Park, at the time at the London Business School – examined this question systematically. Their answer – perhaps not surprisingly – was “yes”.

Fortunately, however, they did not stop there. Because perhaps the more interesting question is, “who is concealing the bad stuff” or, put differently, which firms are inclined to hide their dirty laundry?

Eric and Choelsoon investigated so-called letters to shareholders of 1118 companies as published in these firms’ annual reports. There is quite a bit of evidence that these letters to shareholders form one of the main communication devices of firms to their shareholders and that they have some real impact on companies’ share price. Eric and Choelsoon, through computer analysis of the wording of these letters, made a measure of how much negative information was disclosed in them.

In addition, they collected information on a bunch of other variables, such as the firms’ (subsequent) performance, the percentage of outside directors on their boards, shares held by those outside directors, institutional ownership of the companies, auditor reports, etc. And they uncovered some pretty gritty stuff.

So, their finding number one was: Company Presidents – who formally write these letters – are tempted to lie and hide their company’s bad news. I reckon that is only human. My guess is many of us might be tempted to tone down our failures (and play up our achievements a bit) in such very public statements, to not feel embarrassed and make ourselves look successful. But there are things that can be done, in terms of corporate governance, to stem their & our natural inclination to obscure the truth.

That brings me to finding number two: Eric and Choelsoon showed that having outside directors on the board made firms lie less. The more outside directors firms had the more forthcoming they were with their bad news. Similarly, having large institutional investors prompted firms to be more open about their failures in these letters to shareholders. Large institutional investors tend to monitor the firms they invest in quite closely, which apparently gives them less opportunity to conceal the negative stuff.

But then came finding number three: If we gave our outside directors shares in the company, the results flipped…! Firms that had outside directors who also were quite major shareholders were less forthcoming in disclosing their bad news. It seems that having an ownership stake in the company created a conflict of interest for these people which induced them to stimulate their firm to hide its dirty laundry rather than disclose it.

By the way, interestingly, Eric and Choelsoon also found that those companies that did not disclose their bad news were exactly the companies whose top managers would quickly sell a whole bunch of their privately-held shares shortly after the release of the (overoptimistic) letter to shareholders. Guess corporate crooks don’t only lie; they also steal. 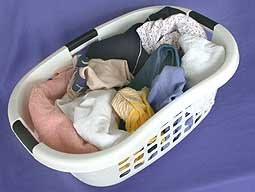 One Comment for “Dirty laundry: Who is hiding the bad stuff?”