This sort of sums up the research that professors James Westphal and Ed Zajac (at the time both at Northwestern University) did in the mid-1990s on CEO successors and the background characteristics of newly appointed board members. Surprising it is not – we all like people who are like us, and think that they are so much more competent than the next guy – but I still find it quite striking (if not shocking) how Jim and Ed could so easily uncover evidence of these tendencies using a few simply statistics.

Because they measured some straightforward background characteristics of all of these guys (sorry… yes, usually guys), such as their age, their functional background, education, etc., in 413 Fortune 500 companies. Using these measures, they computed how dissimilar newly appointed CEOs and board members were from the prior CEO and from existing board members.

If the incumbent CEO was in a powerful position (because he was both CEO and chairman of the board, had long tenure, the firm had been performing relatively well, and because there were few outside directors on the board, who owned little stock), incoming CEOs and board members would be much more like the previous CEO – obviously this guy used his powerful position to make sure someone was selected who could be mistaken for his clone. Yet, the reverse was true too; if the board members had more power, they would select someone quite unlike the CEO and much more similar to themselves.

The tricky thing is of course when the CEO succeeds in selecting more and more board members who are just like him. Then the process escalates because board members and CEO start liking the same people! Eventually, everyone in The Firm starts to look alike, talk alike, has the same background, education, taste in cars, dress, entertainment, and so on and so on. Sounds familiar? Know any companies like that? Perhaps you’re employed by a firm just like that (and good chance that you fit in nicely…), or perhaps it reminds you of this phenomenon called “the success trap”, or perhaps – and even worse – both!

Interestingly, Jim and Ed also analysed what happened to the compensation packages that firms offered to their CEO, if the CEO succeeded in selecting more and more people like them. Guess what, the percentage of his pay that was performance related went down, while the total amount of his compensation went up…!

Guess CEOs don’t just like and select people who are just like them, but those people quite like our CEO too! And reward him handsomely for it. After all, obviously, “he does have the most amazing background credentials”. 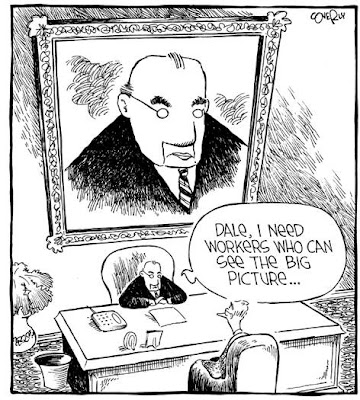