A Creosote bush: How "exploitation" drives out "exploration"

Established, very profitable companies often find it difficult to remain innovative (which may get them into trouble in the long run). In contrast, entrepreneurial, innovative companies often find it difficult to start producing efficiently and make a healthy profit out of their inventions. That is because the organisation required to be creative and innovative is usually quite different from the organisation that is suited for efficient, mass-scale production.

Professor Jim March from the Stanford Business School eloquently put it like this: he said there is a fundamental tension between “exploitation and exploration”. Exploration involves innovation and creativity, which often requires a high level of autonomy for people in the organisation and a flat organisational structure. Exploitation is associated with words such as productivity, efficiency and control, which requires hierarchy and clear rules and procedures.

If a company is financially successful, exploitation often starts to crowd out exploration. This relates to the idea of “the success trap”: organisations start to focus more-and-more on what they do well; the thing that brings them success and prosperity. Yet, this comes at the expense of other things, which may not be so profitable now but which could (have) become important for the firm in the long run. 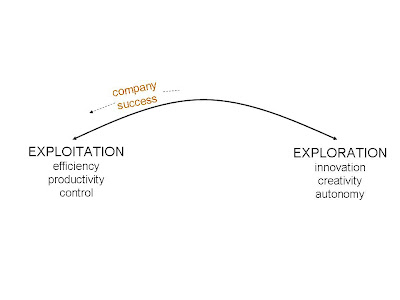 Even the famous Intel fell into this trap. In the 1980s and 1990s, Intel had become hugely successful in the microprocessor business by being extremely innovative and running many experiments in semi-conductors. Yet, once they had developed an enormous advantage in microprocessors, they gradually stopped doing anything else. In 1996, CEO Andy Grove recognised the long-term dangers of this and remarked “There is a hidden danger of Intel becoming very good at this. It is that we become good at one thing”. Yet, he also found himself unable to revive Intel’s entrepreneurial creativity.

In 1993 microprocessors had made up 75% of Intel’s revenues and 85% of its profits. By 1998, this had increased to 80% of its revenues but 100% of its profits! This mega-company basically had only one product on which they relied to bring in all the dosh. That sounds a bit risky… The company’s COO, Craig Barrett remarked about this that Intel’s core microprocessor business “had begun to resemble a creosote bush”. In case you’re not a botanist (and, like me, only appreciate plants when they come on plate), a creosote bush is a desert plant that survives by poisoning the ground around it, so that nothing else can grow in its vicinity… Quite a peculiar way to qualify your top-selling product I’d say, but not a bad analogy. Microprocessors were so successful that no other product could grow within Intel, because it would always look bad in comparison to these damn processor things. 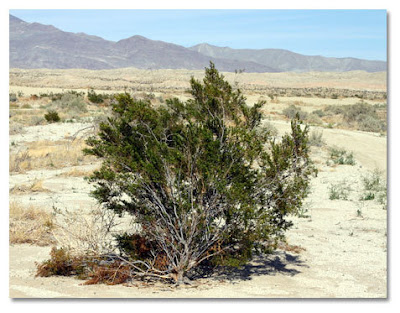 Of all organisations that I have been studying over the past few years, the one that has probably impressed me most in this respect is the famous Sadler’s Wells theatre in London. On the one hand, they are phenomenally innovative, putting on the most novel and creative modern dance shows on the planet. But, on the other hand, they also stage a substantial number of shows that are tried and tested, and from which they know that they will reap a healthy profit without much of a doubt.

How do they maintain this balance so well? There are several complementary explanations, but one of them is that they work on it continuously; literally every day. They aim for about 15-30% of totally new innovative shows in the programme (often the result of a collaboration between artists who usually wouldn’t work together, because they have very different styles, background and training) and discuss this issue all the time. They do that in regular formal meetings, which invariably involve people from various departments, but also on an ongoing informal basis (that is, in the corridor, in the restaurant and in the toilet).

They are always discussing which show should go where on the theatre’s calendar, for how long it should be scheduled, what other show needs to be scheduled around the same time, etc. Because they continuously discuss and work on it, they manage to get the balance right. And, as their numbers show, the cool thing is that often, those shows which at the time were exploratory and considered risky and innovative, are now the ones that contribute most to their bank account.

Related Tags: Companies, Innovation
Previous Topic: A Creosote bush: How "exploitation" drives out "exploration"
Next Topic: Numbers and strategy – do they mix?