“Over the hill and far away, top managers are here to stay”

When do top managers generally decide that it is time to move on and “seek other challenges”? Well, one prominent reason is of course that they are about to get the boot (because their firm’s performance is in dire straits). Yet, that appears to not be the only case. Academic research on American executives – among others by Professor Wagner from Michigan State University – has shown that top managers are not only leaving when the performance of their companies is rock bottom (undoubtedly with a good poke by their board if not a kick in the backside) but also when firm performance is relatively high. Wagner speculated that this happens because then they’re hot stuff on the job market and able to find themselves a nice new green pasture.

Now, although this will hardly be anyone (else)’s idea of “fun”, it so happened I had a database available on a couple of hundred Dutch top managers and was curious whether the same might be true for these guys (yes, all of them guys…). And you know what, after a good chunk of statistical analysis it appeared that Dutch top managers also leave when their firm’s performance is at a high. Yet, they’re not walking at all when it’s low…?! Apparently, Dutch top managers don’t get the sack even if their firms are underperforming.

Interestingly though, these top managers not only left when their firm’s performance was relatively high, but when it was also just starting to (rapidly) decrease. I guess it is all about picking your moment; what better time to get out than when you’re just “over the hill”, and your house of cards is about to come tumbling down! 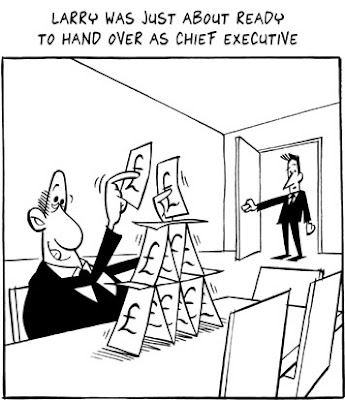 Related Tags: Research, Top Managers
Previous Topic: “Today’s fast-changing business environment”? – same as it ever was
Next Topic: “Over the hill and far away, top managers are here to stay”

4 Comments for ““Over the hill and far away, top managers are here to stay””